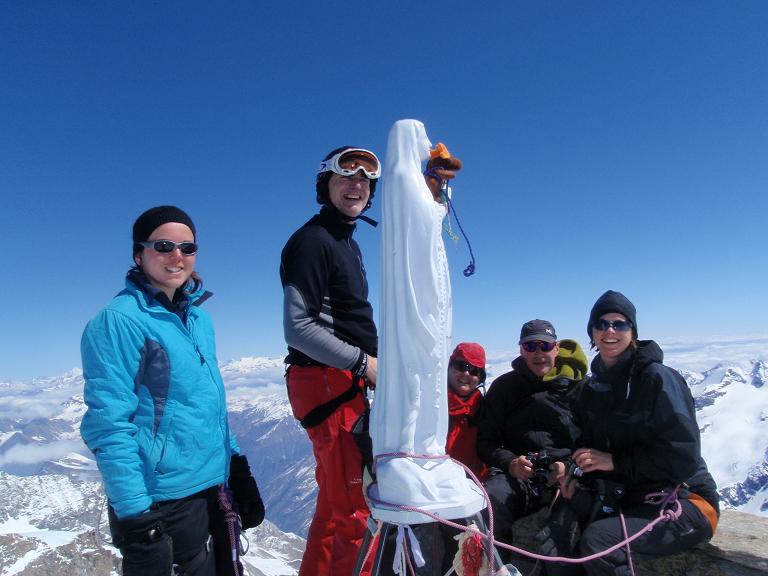 The Grand Paradiso is a national park (originally it was King Vittorio Emanuele’s hunting reserve) and is still full of wildlife. In the spring chamois and ibex are common. Meeting in Chamonix, a short drive through the Mt Blanc tunnel brings you to this idyllic area.

We visit this area throughout the year (we ice climb a lot here) and are always welcomed by the locals. The food, culture and weather are some of the many reasons we return. The skiings not bad either!

Day 1. We start the tour in a valley I know well: Valnotey. We skin (or perhaps walk if it is late season) along the valley floor until we come to the track for the Sella Rifugio. Along the way we revisit our touring skills (kick turns, putting on skins etc) as well as carrying out a transceiver exercise.

Day 2. This is a big and crucial day, good conditions are needed. We aim to make the ascent to the Vittoria Emanuele Hut via the Grand Serra 3552m which is somewhere in the region of 1600m of ascent. There are other options if needs be and the Chabod Hut can be accessed by dropping into Val Savarenche and catching a taxi.

Day 3. Today we ascend Italy’s highest peak: the Grand Paradiso 4061m. This is a mostly straightforward ascent using skis for all but the last scrambly ridge. Here we depot the skis and make the traverse across to the Madonna whilst roped. We descend to the Chabod Hut for a break and downwards to Eaux Rousses.

Day 4. This can be a great stage and we often see the wildlife in the spring here. We aim to ski to the tiny resort of Rhemes Notre-Dame over the Colle di Entrelor. This is a great place to recharge, restock and get a shower.

Day 5 and 6. We head to the Benevelo hut which is a modest 562m from our starting point. In late season we may have to walk a while but often slivers of snow are left to ski on the valley floor. From the hut there are many great day tours from which to choose from. Peaks such as Punta Lavassey, Punta Calabre and the Punta Galisia.

The above is only one possible way of completing the tour. It can be almost reversed (the Benevelo Hut makes a good starting point) and there are many variations.