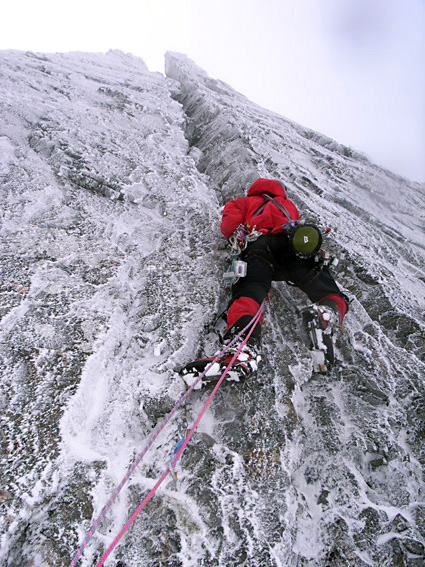 Scottish Winter climbing is unique and people travel from all corners of the globe to experience it. From the mixed climbing of the Cairngorms to the thin ice routes of Ben Nevis.

Scotland has something for everyone. Mixed conditions can come with the first snowfalls (as early as October) though ice normally comes after a few freeze thaw cycles. The Ben for e.g. is often best in early to late March. If you’ve always wanted to do that elusive ‘Cold Climbs’ classic tick or want to learn to lead in winter then get in touch!

Day 1. Warm up in Glencoe! The Buachaille Etive Mor is home to many classic ridges and gullies. If mountaineering in winter is new to you we can take a pick from many of the intermediate climbs such as: Curved Ridge (II/III), North Buttress (III) or the rare Crowberry Gully (III/IV). If you are looking for a harder day out and you are an established winter climber than we can go up a gear and try Ravens Gully (V) or Crowberry Ridge (IV/V).

Day 2. Ice in the Southern Highlands. Beinn Udlaidh is almost alpine in character with cascades forming regularly during the winter. You can look to do two routes a day here if you are going well (or perhaps lead one under Instruction). Classics to go at are: Quartzvein Scoop (IV), South Gully of the Black Wall (IV), Peter Pan (V) and Organ Pipe Wall (V).

Day 3. The Ben. Synonymous with Scottish Winter Climbing, there is something for everyone here! The list of quality routes on this mountain is staggering (it has its own guidebook) and everybody has to climb Point Five Gully (V) at least once. There are ridges and faces of alpine stature (Tower Ridge (III), the Orion Face (V) ) which are major expeditions. The Ben is always a big day out.

Day 4. Cairngorms. The Northern Corries of Cairngorm provide quick access to some great routes. Ice and Mixed routes lie side by side and more than one route a day is the norm. Savage Slit (V), the Seam (IV), Invernookie (III) – the list goes on. For more commitment we can drop into the Loch Avon Basin and climb a bigger route such as Sticil Face (V), Route Major (IV) or Red Guard (VI).

Day 5. Creag Megaidh. Megaidh is known for its Post Face. Some of Scotland’s most sought after gullies are found here and it is often in condition from February onwards. Smiths Gully (V), North Post (V) and the Pumpkin (V) are all Cold Climbs Classics and provide a fitting finale to the week!