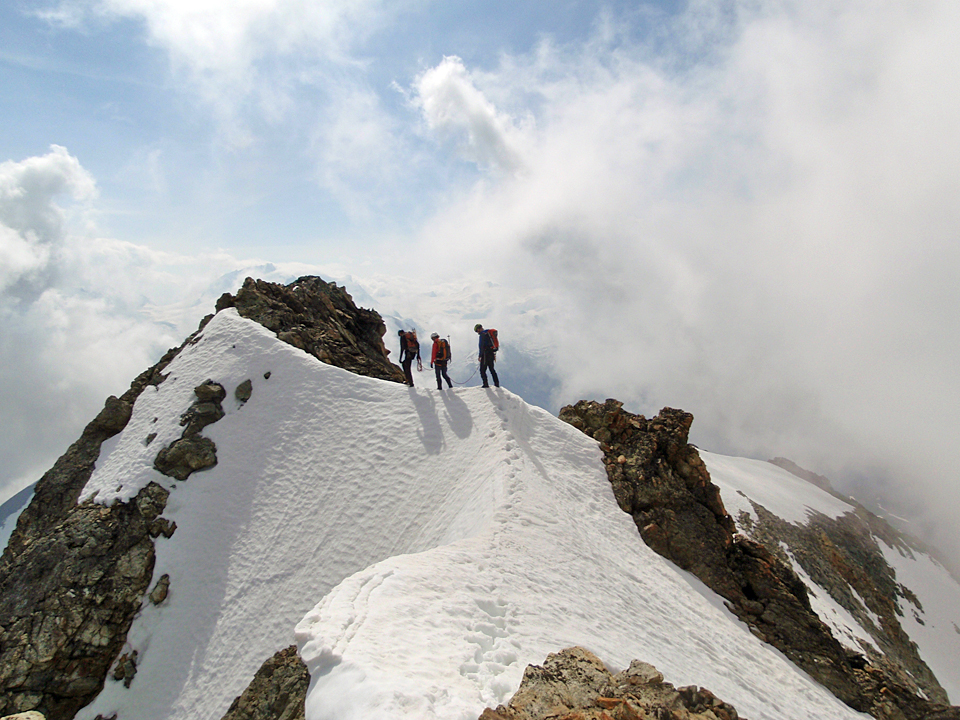 Alpinism in the Valais Alps

The Swiss Valais has a huge concentration of peaks, many over the magic 4000m height. The valleys of Saas Gruund, Saas Fee and Zermatt all provide quick access to magnificent peaks.

The Allalinhorn, Alphubel, Stralhorh, Rimpfischorn, Weissmeis, Lagginhorn, Tasch, Dom, Lensptitze to name a few. The huts in this area are well situated and if acclimatised you can achieve much in a short space of time. Peaks such as the Alphubel and Strahlhorn can be climbed at 1:4 but ratios of 1:2 or less allow more technical peaks and routes such as the Nadelgrat or Matterhorn to be tackled.

Day 1. Ascend to the Almagellar Hut above Saas Almagell. At the hut we can revise glacial travel/moving together.

Day 2. Ascent of the South East Ridge (PD) of the Weissmies 4017m. This superb mixed ridge is one half of one of the best traverses of its grade in the Alps. The descent down the West North West Flank (PD) completes it. A fantastically varied and photogenic route that is very popular. Descend to the Hohsaas Hut.

Day 3. Traverse the Lagginhorn 4010m via the South Ridge (AD III) and West South West Ridge (PD). A superb technical outing which includes abseiling on the rocky ridge. Desend to the valley.

Day 4. Ascend to the Brittania Hut.

Day 5. From here we ascend the classic Hohlaubgrat (PD+) to the summit of the Allalinhorn 4027m and descend to the Langflue Hut.

Day 6. The South East Ridge of the Alphubel 4206m (PD). This takes in the Eisnase which can be icy. Descend for a well earned rest!