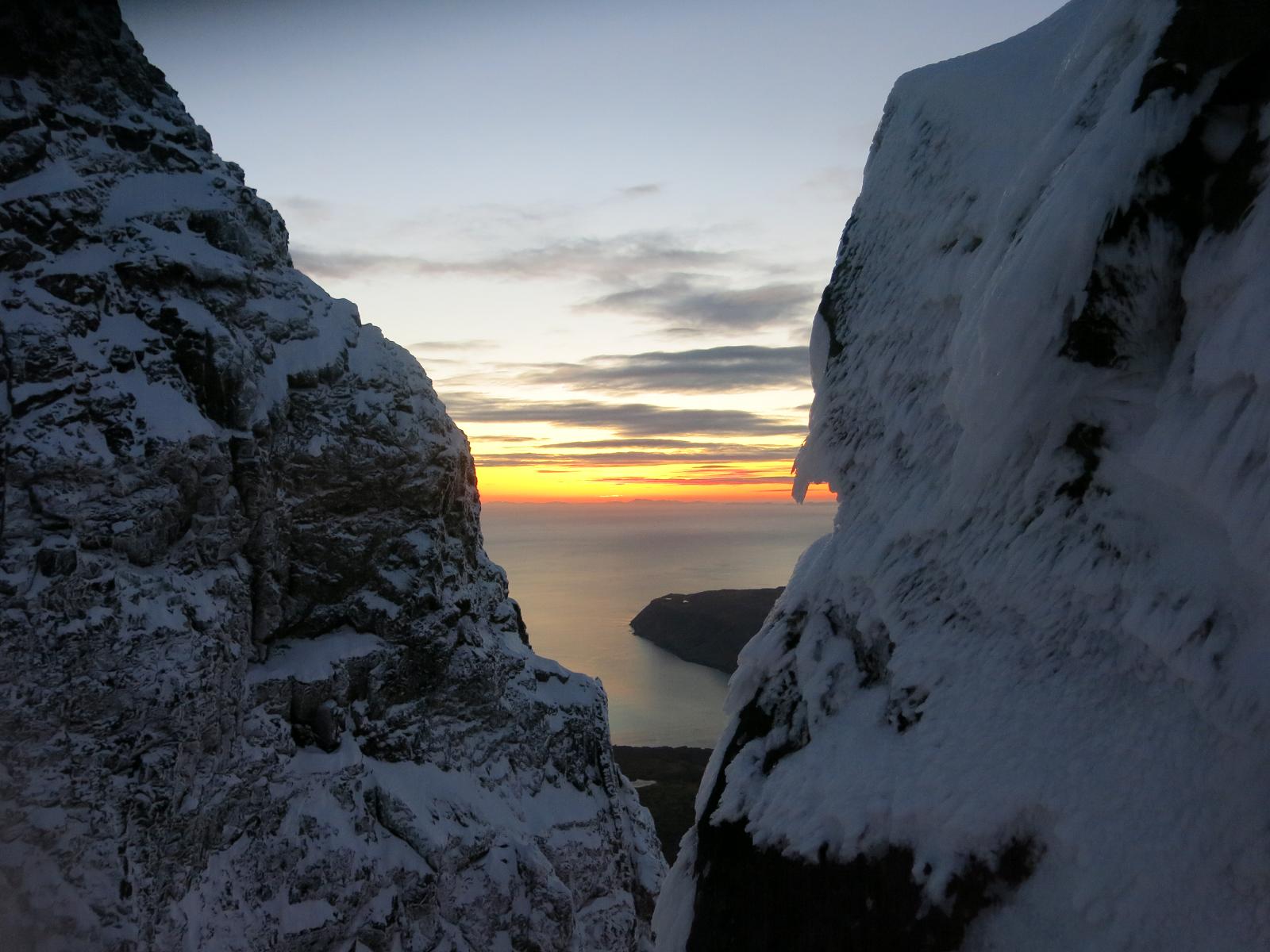 Apparently, a famous Chinese curse goes ‘may you live in interesting times’. This year’s ski season and snow was certainly that. As ever though, the ingredients of flexibility of approach paid dividends and I enjoyed the process of deciding where to go to find the best, and of course, safest snow.

Fresh from a few weeks in Argentina (rock climbing in Frey) I started the season touring around the Italian valley of Valgrisenche. The snow this year came in from the South but then no more. It was mildly depressing but in the short term stabilised quickly. The seeds for a later, unstable snowpack were sown however and the shallow snowpack later became rotten well into the season.

Some of my first work was the ski induction for the British Mountain Guides. The resorts were really poor (hard, icy snow) so we headed off piste to the Grand Saint Bernard pass. Here we skied and skinned some 1800m on pretty good snow.

After a period of ice climbing (which I loved, it had been too long) I escaped to Uzbekistan! This had been planned for some time and I guided with my colleague (who organised the trip) Jim Blyth. Suffice to say we had a great time. We travelled via old, Soviet trains and visited Bukhara, Samarkand and Tashkent. The challenge for me was working with Uzbek guides who spoke no English and skied fast on steep slopes. We did do some fantastic skiing on good powder but I saw some pretty funny avalanche decision making going on – we skied one wild spine where we stopped to dig a pit half way down! Who knows whether I’ll ever go back but I’m pleased to say I’ve visited another one of the ‘Stans’.

The snow and weather continued to be difficult in February and I skied a lot in the lower resorts like Les Contamines and Megeve as well as seeking out small but safe tours in the Aravis. I think my favourites were the Tour des Plachaux which was done in a whiteout as well as the Pointe d’Andey above Solaison.

I then went for a wildcard trip to North West Scotland! If you thought the Alps were having a difficult season then Scotland was having a meltdown, in every way. As luck would have it I managed to coincide with some reasonable climbing conditions and scared myself silly on a hard mixed route called Gully D, Sgurr Thearlaich (Cuillin). I then traversed the classic Clach Glas in winter conditions before finishing on the Triple Buttresses of Beinn Eighe. A nice interlude.

Much of my mid season, pre touring work was running avalanche courses and off piste guiding in Chamonix and its environs. I got away again though for a few days to a new area for me, the Vallee de la Claree. In category 4 avalanche conditions I drove for three and a half hours to Nevache where we approached the Chardonnet refuge via forested tracks. We then skied the col de Chardonnet (I was later to cross this in the month) and back to the wonderful refuge Ricou, where I fell in love with the food and guardianne.

Off piste guiding in Chamonix felt pretty busy after this trip and queuing at the Aiguille du Midi lost its appeal very quickly. Conditions were good though for a while on both the Vallee Blanche and Glacier de Toule. Increasingly I tried to find ways of starting in Italy where it’s cheaper, friendlier and less busy than Chamonix.

I then started my ski touring season proper and returned to the Cerces/Thabor region but this time coming in from the north (Valloire) rather than Nevache. We had an ambitious itinerary but weather and snow were perfect and we had a fantastic week of exciting skiing and mountaineering, mostly on spring snow. One of the highlights on this trip was my having to have a stand up argument with the French army as they claimed I was on a firing range! It all ended amicably when I realised it was just a cultural, power thing and the man in charge ‘allowed’ us to go through (along with everyone else that day!).

I also worked on the British Mountain Guides Ski assessment this year. We skied around the Aiguilles Rouges crossing the cols des Croches, Dards and Beaugent to make a great technical day which I’ve humbly called the Tour des Aiguilles Rouges. It is worth doing if you’re moving quickly and you enjoy mountaineering as much as skiing. We then went into darkest Switzerland skiing around Mont Velan and the Grand Combin (via the col de Meitin). Conditions were a bit leaner than last season and we encountered more glacial ice this time around and I noted that the snowpack was only 1m deep at around 3000 metres – I hope this late season snow will top it up a bit for the summer.

I then went straight back into even darker Switzerland, the Bernese Oberland . This area is definitely one to travel by skis rather than foot. The distances are big and the glaciers torturous in summer. Again, we hit it lucky with the weather and skied a nice transformed snow pack most of the week. The highlight was climbing the Fiescherhorn (a 4000 metre peak), the low point skiing under dangerous seracs on the way to the Finsteraarhorn hut.

My ‘Easter’ week with the Kutarkski ski group was in the Vanoise alps, France. We had a full 7 days touring in the region and had a great time. We didn’t get to ski the Grande Casse as it was so cold but successfully traversed the ice cap, meeting Roger the rabbit along the way (he lives in the Arpont refuge). Low points were spending far too long crossing the ice cap in increasingly bad weather/visibility and losing feeling in your hands. It was a relieved guide and group who got to the col de la Vanoise refuge that night. The Femma refuge was a highlight and was a nice way to end our traverse, before the fleshpots of val d’Isere.

Finally, I got to work on my annual attempt at Mont Blanc with the Goode brothers et al. I set aside ten days for an attempt, working six – surely this would be the year we all got up it together? Well, it was and I am pretty proud and relieved in equal measures. We acclimatised from the Albert Premiere refuge which is a great base from which to work – I like traveling these areas on skis as opposed to trudging down in summer and it’s quieter. The weather though was difficult and it became obvious we had one window only. All our eggs were in one basket.

We approached the Grands Mulets refuge in poor weather and it was a pretty despondent hut that evening. About 80cm of fresh snow had fallen and there was no track. It would take a team effort and a lot of luck to summit, particularly as a strong NW wind was forecast. I decided to start later (3am) and follow what I assumed to be the leaders ahead of me but that plan got scotched as all the other guides found out and also started at 3am!

So, along with James and Miles I set out at around 4am (late for a Mont Blanc) towards the North Ridge of the Dome de Gouter. It was then that the dawning realisation of ‘everyone is going the wrong way’ hit me. Of course, all the German/Swiss/Austrian guides were going up the Grands Mulets route as it was less steep/easier to break trail (the Grands Mulets route is serac threatened so I don’t skin underneath them, I will ski under in descent). This was tricky as obviously our chances of summiting were greater if we followed the track (and it would almost certainly be ok) but that is the conundrum of guiding in low probability, high consequence terrain. James and Miles were on board however and we set forth with plan A, to be honest, expecting to perhaps get to the dome de Gouter but in all likelihood not the Mont Blanc. Thankfully two Americans came with me and agreed to share the work and so we set forth with it. And it was hard graft but like eating an elephant we just did it one chunk at a time. The transition from skinning to boot packing was a bit of a swim for a few metres but then ok, if not still a little insecure on underlying ice at times. Finally we crested the plateau and it dawned on me that actually we had a good chance of success. The Bosses were climbed with our skis on our back (we were going to ski the North face after all this effort!) and we reached the summit alone, late but pretty emotional. The wind was increasing all the time now though and we were getting seriously cold – we descended the face quickly and to be honest I wished we had had more time but it felt serious (Miles developed bad frost nip, his cheek and chin freezing into waxy, white lumps). The snow had preserved fantastically well for us though and we enjoyed a 3000m (!) descent all the way to 400m above the Mont Blanc tunnel (missing out the threatened descent back to the Plan d’Aiguille in the late afternoon). A satisfying end to a varied season.