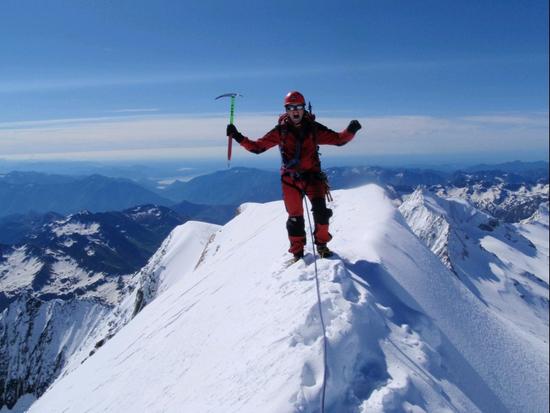 This is a short article I wrote for the BMC.

Alpine Peaks – the Next Step

You’ve hillwalked in Snowdonia and the Lake District and even forayed into the Scottish Highlands to sample some winter action! This summer though you’ve decided you are ready for ‘the Next Step’ and booked your flights for the Alps. Where to start though?

You know you want to walk on a glacier but there is nothing like getting to the top of a summit. Here Tim Blakemore suggests five alpine peaks suitable for a first time trip to the Alps.

This peak is climbed over two days using the Aiguille Rouges hut (2810m) as your base camp. Lying above the wild and beautiful Val d’Herens and village of Arolla (Swiss Valais Alps) it is an ideal first, first peak! Day one is spent walking through the tree line, higher alpine meadows and finally the chaotic moraines of the Aiguilles Rouges glacier. After booking in to the hut you can spend the afternoon practising your rope work for the next day’s adventure.

The summit day starts around dawn to take advantage of the night’s refreeze. The way is well marked (though check out the first 20 minutes the night before) and you follow old moraines until you reach the glacier proper. Here you don the rope and head NW across it before summiting on a nice rocky peak (700 m 3 hrs). Return via the same route.

Staying in the Arolla area this peak offers another two day adventure, this time based from the superb Dix Hut which is reached via the ‘Pas de Chevres’. This pass itself is a good outing and is reached from the village by at first following old ski pistes then good, well marked trails. It culminates at a rocky col which is vertiginous on its Western flank. Luckily it has been excellently equipped with ladders which are straightforward to climb or descend – and if needs be a safety cable is in place for via ferrata equipment.

The summit is easily reached on day 2 by following the glacier (fast disappearing) in a South Westerly direction before gaining the South East ridge and then the summit itself. Return via the same route.

The Mont Blanc massif has a hard core reputation but there are plenty of accessible alpine peaks for beginners. This peak is reached from the Albert Premiere Hut which itself is a nice hut walk and not on a glacier. Start in the tiny village (and ski resort) of Le Tour. Here a lift can be taken to save a bit of energy and time at the start of the day. A well-worn and marked trail leads around the hillside (look down to your right for marmots) before joining an old moraine. This is followed directly to the hut.

The next day a dawn start should be ok (those climbing the Aiguille du Chardonnet will have left around 2am!). A good track is normally in place on the Glacier du Tour and it is a good idea to stick to it. Later in the season crevasses can open up here. The Tete Blanche is easily reached without difficulty in around 3 hours of waling in incredible surroundings. Return via the same route.

This peak lies above Valsavarenche in Italy’s Gran Paradiso national park. One of the great attractions about this area is the abundant wildlife. It was originally stocked as a hunting ground for King Victor Emanuel II and the park created to protect the iconic ibex from poachers. Nowadays they are doing very well and you stand a good chance of seeing them.

From the road head at Pont you walk through pine forests and open ground before the distinctive Vittorio Emanuele II hut is reached in about 3 hours where you can sleep in the afternoon sun.

You are likely to have summit day to yourself (the vast majority of the people in the hut will be heading towards the Gran Paradiso) so it’s worth checking the route down towards the glacier the day before. The glacier is followed in an Easterly direction before heading South West at around 3200m to gain the North slope then North West Spur which is followed to the summit in around 3 hours. Return via the same route.

You’re well acclimatised and the weather is settled with little wind and visibility for miles; it’s a good day to go ‘high’. The Zermatt lift system allows you to access incredible glacial terrain and in effect you ‘gain’ a day every time you use it – it doesn’t come cheap though! The Breithorn is well seen from the Mattertal and is an ideal ‘first’ 4000 metre peak.

The route is entirely on snow and it can be busy – the views are magnificent.

Take the Klein Matterhorn lift and gear up at the pistes. Rope up and duck under the piste markers onto the Breithornplateau. Head East-North-East towards the Breithorn Pass (3842m). Now head North to the South-South-West Flank which is normally well tracked. The rimaye (crevasse where the glacier is pulling away from the mountain) is sometimes a little open here but normally easily passed before gaining the summit in around 2 hours. Return via the same route.