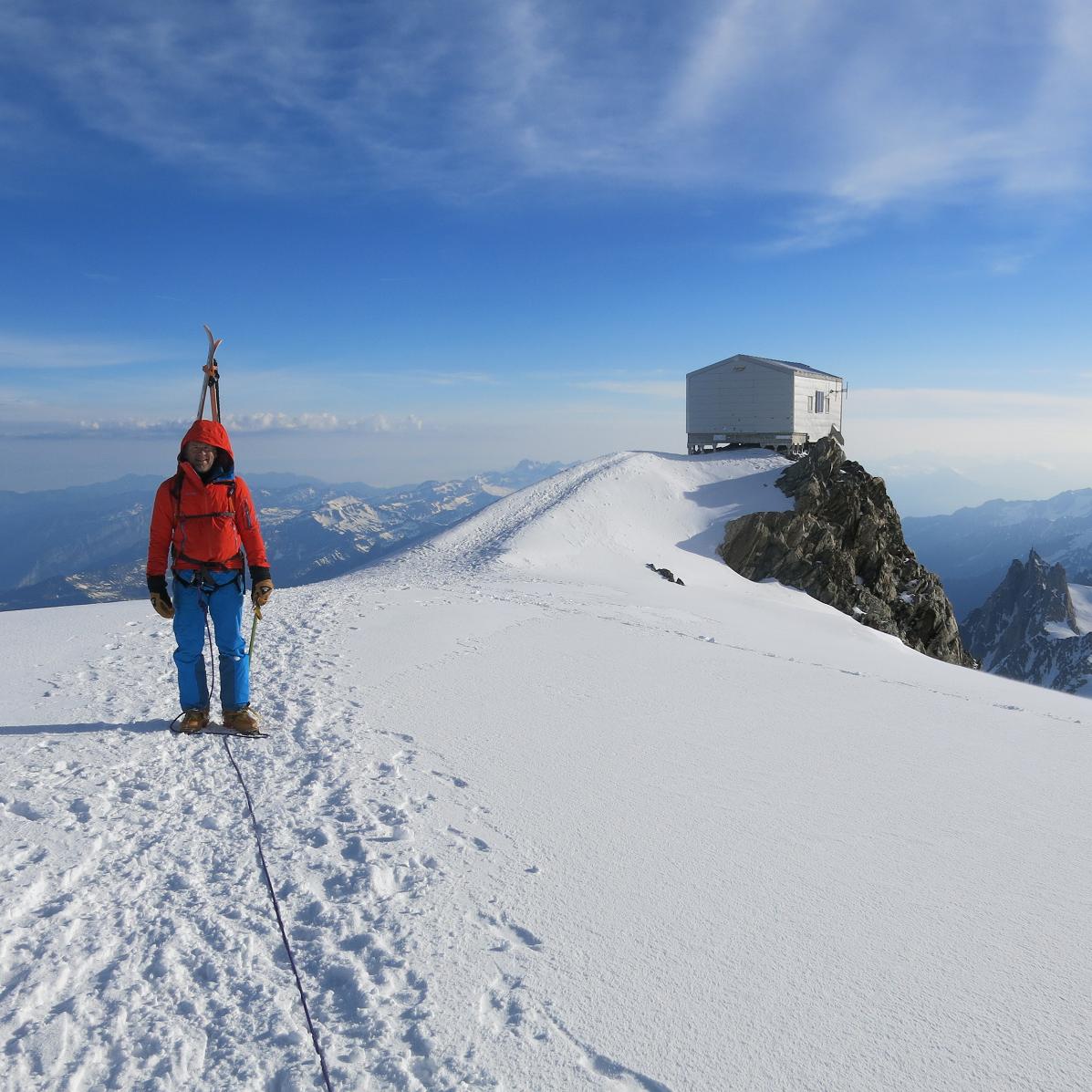 The line between seasons is blurring in the Alps as we experience changing weather patterns; June however has always been the best time to ski Mont Blanc and this year was no exception. In fact I had hoped to ski Mont Blanc in May (probably the busiest time) but had a terrible foehn week (warm and wet wind from the south) so it was not to be. David got in touch however, was already acclimatised and keen to ski the North face of western Europe’s highest peak.

My immediate problem was that my own acclimatisation was not that great. I’d been mostly lying in a tent in Alaska for the previous few weeks (at about the same altitude as my house in France) so needed to gain some extra red blood cells before I was also happy to commit to a summit attempt (and skiing Mont Blanc is only done with known clients).

We decided to warm up in the Mont Blanc massif and use the lift on the Aiguille du Midi. This gets you incredibly high quickly and into wild glacial terrain. After negotiating the arête (it is not equipped in spring so you have to don crampons, axe and carry your skis on your rucksack) we skied the classic Vallee Blanche till underneath the Pointe Adolphe Rey. At this point we changed to ‘up’ mode, put skins and a rope on and weaved our way through the crevasses to Pointe Helbronner on the Italian side. We had a quick picnic stop here and change back to ‘ski’ mode before we skied some good tracks on beautiful spring snow back to the pointe Adolphe Rey. We then started the grind back up to the Refuge des Cosmiques, our home for the night.

We had an earlyish breakfast (5am) and set off in the cold of pre dawn towards the Mont Blanc du Tacul. I rarely guide this 4000 metre peak as it is often serac threatened and is sometimes prone to avalanche. This spring it did seem to go through a benign period however (as I write this in the autumn it’s in particularly active condition and to be avoided). The skinning is quite steep and definitely crevassed. We had the rope on for much of it and transferred to crampons near the top for the final mountaineering section (about PD grade). The ski down was fun, on cold powder mostly and goes through some interesting terrain. All in all I thought it was good training for the main event.

We decided to attempt Mont Blanc by the Arête Royale or North Ridge of the Dome de Gouter. This in itself is an excellent ski mountaineering route but I don’t suppose many do just that, most preferring to put the extra effort into bagging Mont Blanc. It is a huge undertaking however; 1700 metres of ascent, much of it on steep snow or ice with your skis on your sack. Fitness and acclimatisation is paramount.

We set off from the Plan d’Aguille (the half way station) and skinned, traversed, and booted across to ‘La Jonction’, a chaotic and heavily crevassed area. I thought conditions were pretty good here (perhaps a bit spring like but still ok) and eventually we made it to the Refuge Grands Mulets 3057m (along with everybody else!). This is a historic site and where the original ascensionists’ route went, though it is primarily a ski or springtime route now (too crevassed later on in the season). The forecast was good and we went to bed ready for a few grabbed hours before the early start (01:30 breakfast).

The weather as we set out was warm and wet though and it started to snow (wasn’t forecast). I was getting seriously cold and wet and could feel the snow pack underneath the fresh snow was still warm and not frozen so was having some real concerns. Eventually we reached the point on the arête where you transition from skinning to booting and we made the call to abandon ship. This meant quite an exciting ski down the arête with headtorches on but I was really relieved not to be heading up into those sort of conditions.

We had a few cups of tea (sorts most things out and allows you to think) and Dave asked could we simply try again the next morning? I was really keen for this as the forecast was improving and the route would be quiet (Monday) so that’s what we did!

We set forth again and skinned the steep slopes of the Dome, the lights of Les Houches and Chamonix twinkling below. We made our highpoint in good time and set forth up the arête. Interestingly after yesterday’s traffic I expected a track but it had all blown in and we had a pristine time of breaking trail, being the only team on the route this day. My friend (American Tim Connely) who was guiding the standard Gouter Route on foot told me later we were highlighted on the arête from miles away and it looked Himalayan in scale and stature. We joined the normal route at the Dome (where it traverses) and made good time skinning towards the Vallot hut. Here, as a skier you have to decide whether the face is in good condition and perhaps more importantly you are! The face certainly looks intimidating, with crevassing and seracs barring many exits it pays dividends to scope out a line of descent here.

We were feeling good however and I thought the face looked in superb condition, yesterday’s snow still being powder at these altitudes. So we carried on up the Bosses Arete, methodically kicking steps and trying to pace ourselves. We came across a few colleagues of mine starting their summer season with their first Mont Blanc of the summer and we reached the summit as most of them turned for their descent back to either the Tete Rousse or Goute Hut. It was a good moment sharing the summit together and the sense of anticipation was growing as I looked over the small cornice and realised I could literally ‘drop’ straight from the summit (normally I have skied back towards Mont Maudit a little).

The first turns confirmed our thoughts and we enjoyed powder snow through incredible terrain; steep slopes, seracs and crevasses. It felt gluttonous with all the space around us and I almost felt sorry for my colleagues still descending the Bosses Ridge as we whooped our way down towards the glacier towards the Grands Mulets. The skiing eases off from 40 degrees, to 30 then easy but serious terrain towards the hut. The crevassing here is enormous and controlled skiing is paramount. Finally in ever increasing temperatures we reached the hut where we grabbed a final cuppa before the long, sweaty traverse (up and down) towards the Plan d’Aiguille, literally skiing to the final moraine wall.