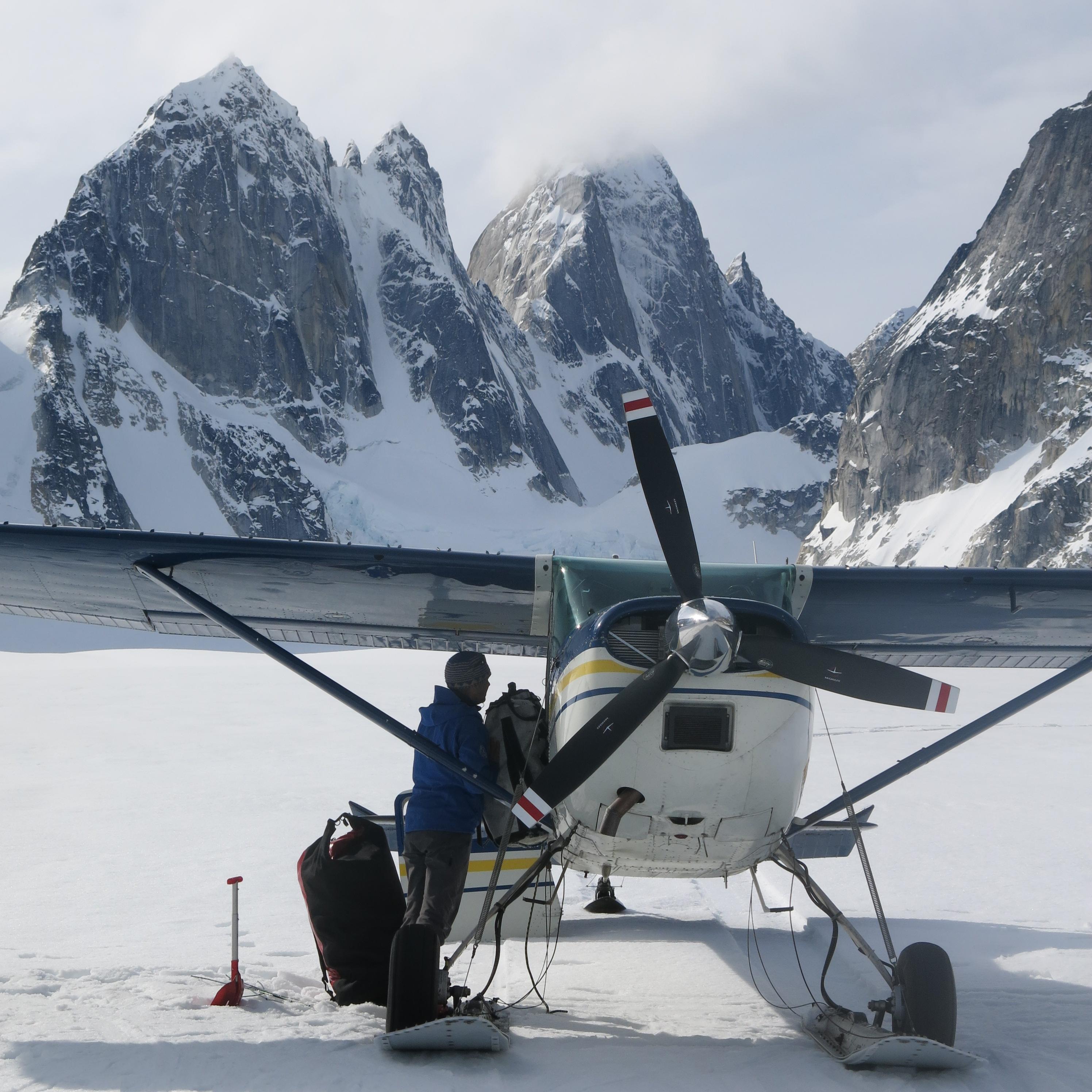 Alaska is a land of superlatives. It’s big, wild and hairy (and, as the joke goes, that’s just the girls in Talkeetna). I’d heard so much about it that I knew sooner or later I’d end up there. And I did. And I came away again with a great new route.

Twid and I had climbed together before in Senja (climbing a great new thin ice and mixed route on Grytetippen at about M7 – “Pass the Dutchie”) and we had hatched a loose plan to climb something in the Kitchatna Range (sometimes called Cathedral Spires), Alaska. Twid has an almost endless enthusiasm coupled with an encyclopaedic knowledge of new route potential in different parts of the world which is so helpful when applying for expedition grants. We were lucky on this trip receiving help from MEF, BMC and the Alpine Club.

In May this year we flew in on the ‘Condor’ flight from Munich and immediately went shopping (!) in Anchorage. This done we then caught our arranged transfer to Talkeetna where we dossed in the infamous climbers hut provided by Talkeetna Air Taxis. The next morning (Alaska is really quick) we met Paul Roderick who was enthused by our “little” expedition and told us it was to be “just like the good old days”. We shoved all our kit into a little single engine Cessna and set forth. The flight was a vomit inducing, bumpy affair and at one point my foot hit the roof as we crested cols before violently circling in an ever descending spiral towards the Tatina glacier. As we neared the wind did die and soon enough we were throwing kit out and soaking up the atmosphere of this wild place. Of course what we should have done was test my satellite phone but that’ll come later.

The Kichatnas are a bit like Chamonix in that they are granite, glaciated and steep. Traditionally most routes have climbed the big faces (sometimes in a big wall style) and we had come with a couple of alpine type objectives in mind (Twid is an accomplished big wall climber whilst I prefer icy alpinism). The first day or two we spent battening down the hatches, scoping the immediate area with binoculars and going for a recce to the Monolith col (where one of our objectives lay). Taking skis was a great decision and it made getting around so much easier (and fun). Once at the col we dropped down into the Monolith glacier and discovered that our prime objective simply hadn’t formed this year. I had mixed emotions as it looked hard but had seen what I thought were two really excellent (though shorter) lines on the North Triple Peak. According to the guide only the NW couloir in that vicinity had been climbed so we reset our objective to that peak.

Wanting to do a route and actually getting up out of bed each day are two very different things and experience had taught us both that going off too early can affect a trip badly. The wind just wouldn’t settle and a few days were also dumping snow. Days settled in to the first week and we were eating like champions but hadn’t really got any nearer to getting out the tent. Finally we got a break and ferried a load of kit up to the col again and skied back to the tent to await the next break. Again the weather was awful and it looked like it might be an expensive camping trip but finally it dawned fine so we quickly set to and skinned up to the col and dug all the kit out.

We had decided that the route should go without a bivouac so went pretty light (single push) and set off up the NW couloir. This proved to be technically straightforward but annoyingly insecure and slow, meaning we pitched it (6 pitches). I could imagine this section being soloed in future or at least simul-climbed quickly. Soon we crossed over on to the true rh bank and set up a belay under the weeping ice smears cascading from above. This was to be our route and we had seen that much of it seemed ‘there’ though there were a few ominous steep blank bits and it became vague underneath the summit.

Twid set off up into the maelstrom on what seemed to be pretty good, though thin here and there, ice and the couloir proper. These first pitches were around AI (Alpine Ice) 4+/5 and were fun; technical without being too desperate. We approached the crux though and could see it was going to be a bit trickier; an overlap barely iced with a vertical section leading to it. I led this and the first vertical section was classic 5+ (90° but good ice and protection). It led up to the overlap where I encountered rotten ice and I spent an age trying to fiddle protection in. Eventually I did find a small area of ice that would take a screw and I breathed deeply, gave Twid a shout of ‘watch me’ and pulled through and upwards to finish some 70 metres after setting out (Twid came with me at some point). A solid AI6 pitch and what was to be the crux.

After this it went in a bit of a blur but we climbed pitch after pitch of good ice in a great atmosphere (all the belays being good which helps the head a bit also). We did lose a lot of time in the upper third of the route as I climbed into a cul de sac but finally we found a way through (the route generally follows a strong, gully like line all the way to the summit) to the finishing couloirs.

The temptation to finish at the end of the rock (a pitch from the top) was strong, particularly as the cornices resembled grotesque meringues and had the consistency of sugar. I had spotted a vertical (or horizontal?) crevasse and squirmed up into it and sort of ‘back and footed’ to the top where I tunnelled through, only to find a larger and even more difficult cornice blocking the way. Eventually I found a ‘merely vertical’ section where with a bit of heavy breathing and levitation I found myself on top with no more up. My first Alaskan summit, by a new route.

A buried axe and a body belay had Twid up and after a quick check to make sure we definitely were on top he set about making a bollard for our descent. I got the satellite phone out (which had failed to work at these latitudes in steep valleys) and at around midnight local time got a call out to Tamsin, screaming into the wind that we needed to get picked up and could she relay the message to Talkeetna?

All that was left was the familiar routine of abseils, threads and checking anchors. I can’t remember exactly the timings of the descent but we were probably quite tired by the time we reached the col again. Certainly our racks were lighter. I do remember skiing back to our ‘base camp’ loaded with all our kit happy but weary.