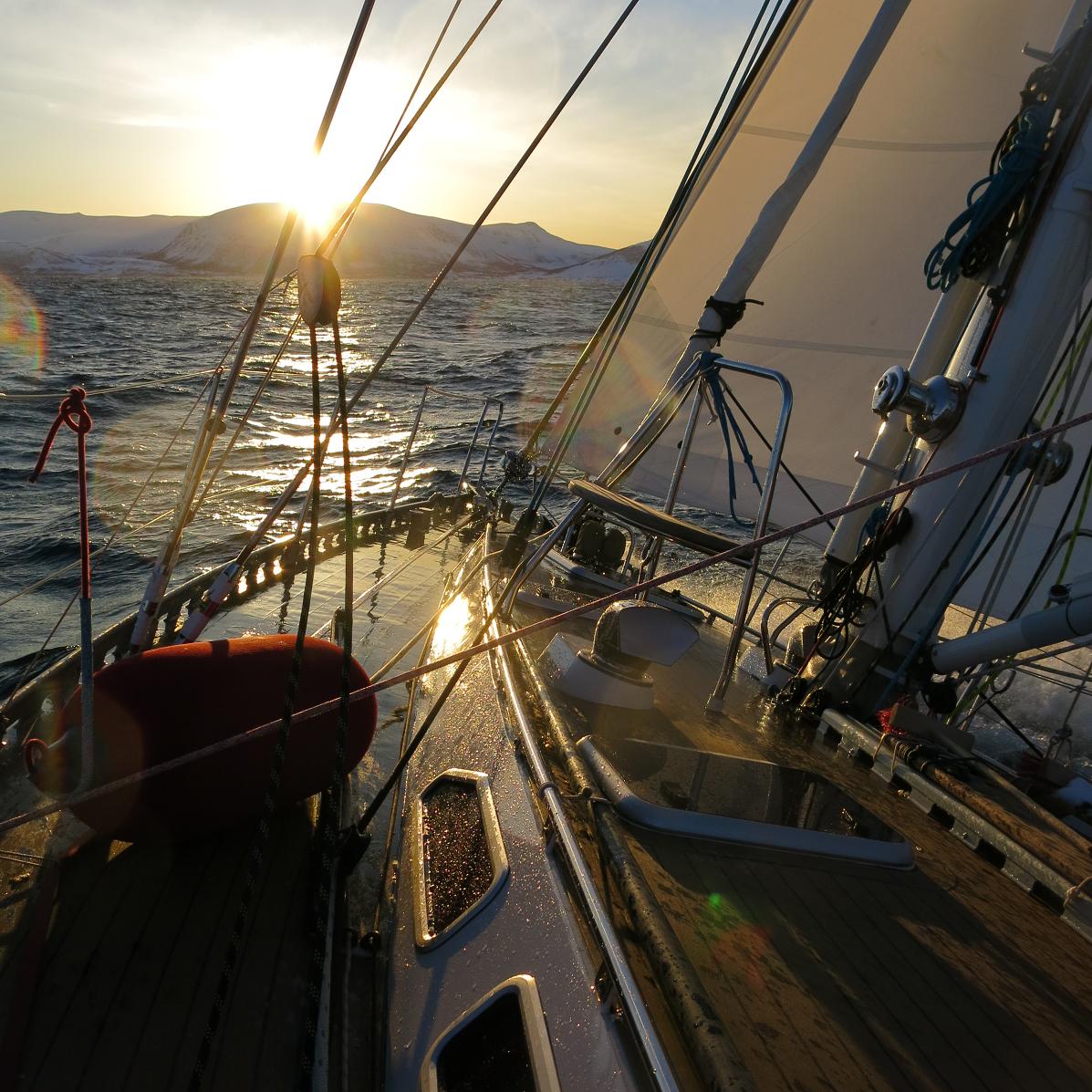 One of the great joys of working for yourself is the freedom to drive your work where you want it. I increasingly enjoy designing and leading small bespoke trips to interesting places, and am blessed with a small cadre of likeminded clients who buy into this philosophy. When I received an email from Andy and Janice, who live on and sail, as a business, Yacht Destiny (and who were ‘over wintering’ in Tromso) I realised I had also found likeminded souls and a yacht which fits my adventure blueprint.

Yacht Destiny is an incredible yacht. Her specification is impressive but the attention to detail is something else. Because of her modest size however (47 feet) she retains that genuine yacht feel and sails well (we easily cruised at 7 knots).

A few quick and fortuitous emails later and I had found 3 people (Will, Carla and Anthony) who were interested in joining me for a 5 day ski and sail trip sailing out from Tromso, in the Arctic Circle. Ski and sail trips are becoming incredibly popular as people search for a more genuine or different experience and the Lyngen Peninsula and surrounding area cry out to be discovered from the fjords. Lyngen itself is suffering to some extent with its own hype and there are some pretty big boats off loading 2 or 3 guided groups at a time but we found the smaller islands quiet and rewarding.

My adventure started in Frankfurt airport where I quite impressively missed my connection onwards to Oslo. Some pleading with Lufthansa and to give them credit, they gave me another flight. Things did knock on however and I was pretty tired, out of pocket and a bit hungry when I arrived well after midnight at the pontoon in Tromso where I met Andy and Janice in the flesh (the team were tucked up and well asleep). A quick meal of meatballs and a plan for the morning had me diving into the Pilot Berth (usually used at sea when undertaking big crossings) for 39 winks which came round pretty quick.

I awoke to Janice’s hand coming under the curtain with a hot cup of tea which is about as nice a way to wake up in a boat as you can get. It was to set the tone as I nearly drank them out of tea bags. We motored out of Tromso and had a couple of hours or so to get the maps out and make a few plans for the following week and generally get excited about the trip.

Our first objective then was Nordfjellet (1000m) on Ringvassoya (an island connected to mainland Tromso by bridge). We landed by RIB (we got quite slick at this routine throughout the week) and skinned our way up into the birch woodline common here. We noticed a couple of large range rover type police cars (though unmarked) in a layby and later on worked out that we shared the mountain that day with Norwegian royalty (there was one other group on the hill)! The mountain was typical of many in this area in that it had nice skinning terrain culminating in a pretty wild corniced ridge – almost too wild as it loomed out of the whiteout conditions we had that day. Luckily for us the snow was excellent and we enjoyed powder all the way (other than the last 70m vertical) to the beach (though there was the odd lurking rock underneath).

We anchored nearby in the shelter of some small islands and decided to stay in this area one more day before sailing on. Our next objective was a neighbouring peak named ‘Rema 1000’ which apparently is named after a local supermarket. I thought we had the best snow of the week here (though again we suffered a bit with visibility). Much like Nordfjellet it was a long skin though this time the summit slopes reared up and we booted to the summit for a steep ski down and a fantastic whoosh through the birch forest on perfect powder.

Our next objective was a true island destination called Vannoya. There was no guidebook information on this venue but from the map a couple of objectives stood out. It had snowed heavily throughout the night and morning and we held off a while before pushing on out into it. It soon cleared as forecasted but the trail breaking was laborious; it did mean we might get a good ski however. As a nice bonus Andy and Janice joined us on this trip (the yacht was safe on a pontoon) and we followed a community ‘ski de fond’ track along the bed of the valley before breaking out onto the slopes above. Our peak was a modest 873m (called Vannaksla) and proved to be a good fall line ski outing. Again we managed to ski all the way into the village and along the road (passing ‘the pub’) until we reached the yacht again.

That evening we raised the sail (we really were on a ski sail trip!) and set forth for the Lyngen peninsula. The boat canted right over and we reached 7 knots (we had been seeing who could sail the fastest) and it really did add a dimension to the trip. As we settled in to another feast prepared by Janice the Aurora Borealis arced overhead to put a finish to a great day above the Arctic Circle.

We had to go to Lyngen on this trip simply as it is so well known. The mountain we chose didn’t disappoint and we skied the best line of the day there (some great steep couloirs) though it was a busy day. The peak was called Storgalten 1219m and though higher than some of our other objectives we raced up it. We relaxed on the summit watching various teams ski different lines from the top (above all I thought this peak had a multitude of options) before setting off down. I could sense Will urging me on to look for the couloirs mentioned in the guidebook and so we had a quick peep in. With luck on my side I landed right on top of the main one which was unskied and in great condition. 40 degrees eased to 35 then opened right out on huge open slopes we gluttonously carved up. I finished by the variation mentioned in the guidebook though this was not so good! Warm snow overlying scree made for some wincing turns as we scraped and gouged the bases of our skis. Still, a nice day in the sun skiing untracked powder and steeps.

Our last peak was Ullstinden (on mainland Tromso) which we traversed, truly using the yacht. As we skinned up Andy and Janice repositioned Destiny and anchored in a bay we had identified earlier. Again the skiing here was adventurous, following a line next to a broad, corniced edge (Anthony thought too close!). Soon enough we were funnelled in to a gully where we could see the yacht way below and we skied this down, again into the birch (we came to love whizzing through these trees) and finally right out on to the beach. That’s what we came for.

A great trip then. I am very interested in returning to Tromso next spring (2016) and also further north (Alta/Finnmark). If this appeals please do get in touch.