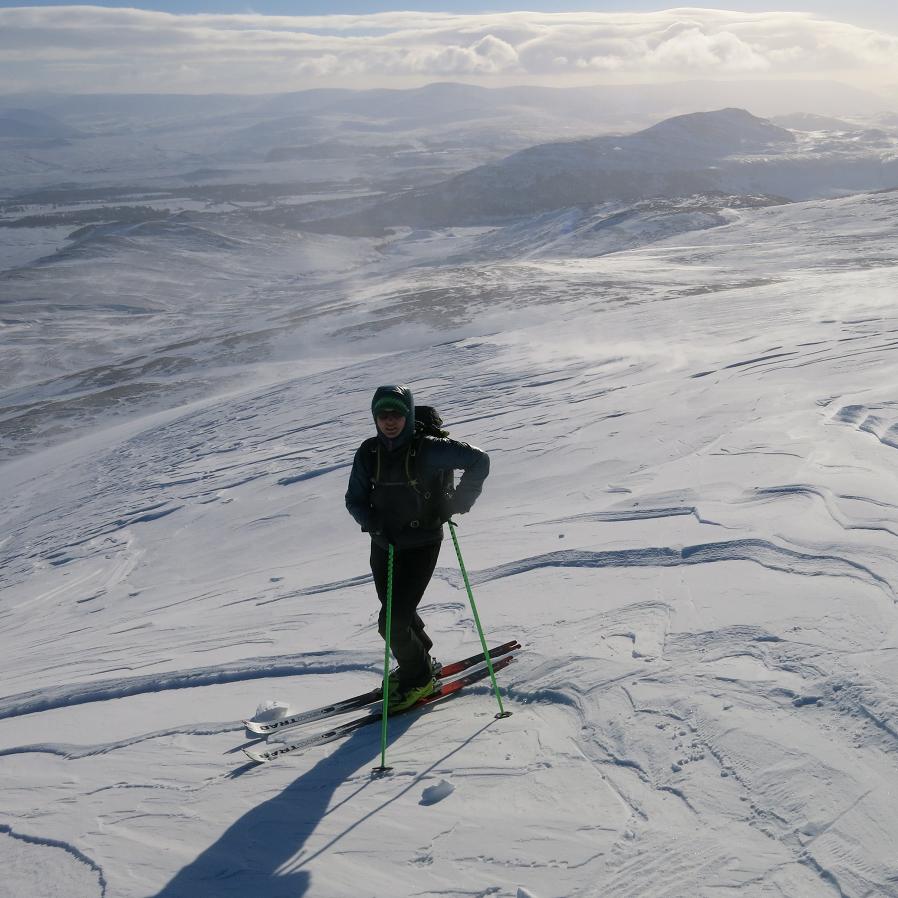 I remember asking my French teacher what the French phrase for “I work too much” was. When she struggled to answer immediately it gave me a great opportunity to point out that it probably didn’t exist in France? A cheap and funny line that hid a truth not that the French work too little but that I probably do, in fact, work too much.

This season certainly had been lining up to be one of my busiest winters but events have curtailed that. I’m now sitting in front of the computer stretching my left leg literally millimetre by millimetre to improve range of movement of my knee joint and thigh muscle; both of which were severely cut by a ski a few days ago.

Before that I had been having a good time and actually some holiday, the highlight I think was a trip back to Scotland for personal skiing and climbing. Scotland is fickle but unfortunately now and again you get it right which means you spend the next decade trying to capture that experience. This season has been superb so far and I came at a period of quite heavy snow as the climbing conditions were just getting really good.

Tamsin and I spent the first day ski touring from the village of Newtonmore with the objective of a Munro – A’ Chailleach. Ski touring in Scotland takes a bit of getting used to and you have to have a more open approach to, or even interpretation of, getting good snow. I always remember the tongue in cheek description from cairngorm ski resort describing the conditions as ‘powder under a firm base’. We didn’t find powder but we did find some nice hard pack, some windblown soft deposits as well as a bit of everything else. More than that though we skied in an arctic like light amongst the fantastic backdrop of the Monhadliath mountains and the wildlife that inhabit them. We saw countless mountain hare, deer, grouse and ptarmigan.

The next day I set of on my own to the mountains of Creag Meghaidh. I’ve climbed here a little; I do remember one trip trying to climb as many of the ‘Posts’ in one day but never skied there (in fact I have barely skied in Scotland at all). I intended to try and do the ‘Coire Ardair round’ which would end up at Moy (needing a hitch) which is supposed to be a ‘classic’ and set off up to bag the first of the three Munros, Carn Liath.

This was a bit of a sweaty, heather clad and windswept affair which wasn’t helped by cloud descending to shroud much of the plateau. A keen wind also meant that I had to keep moving though I did have a few moments when the low sun cast alpenglow across the peaks opposite me. When I finally reached the plateau I was dismayed as much of it had been stripped and all that was left were huge fangs of rime on each and every protuberance meaning for parts of it I carried the skis. Things improved on the way to Stob Poite Coire Adair (the second Munro) but only a little. There was enough snow to ski but visibility was reduced and it was still windy. It was quite exciting to be skiing down the ridge towards ‘the Window’, compass in one hand whilst trying to judge slope angles and aspects (and not ski off the edge).

The one good thing about the Window is that it is unmistakeable, which as a lone navigator on Meghaidh is comforting. I had a quick snack here and put skins on and set off up towards the plateau again. Luckily the wind died and the clouds lifted (along with my spirits) and I could see the route and its options ahead. In fact whilst the descent to Moy I am sure would be good the ground leading to it had been also stripped so I started considering the magnetic line of Easy Gully which I had secretly been trying not to think about all day. Desperately trying to be objective about the ski I still came to the decision that it should be good, or at least safe (the wind had been blowing up the face) and went to peer over the edge.

It did indeed look good, stripped at the top but enough snow left in to grip the skis but not too much (too send me hurtling to my doom below). And so I tentatively dropped in, skiing conservatively but with increasing confidence as the conditions were in fact perfect; the snow was re-blown deposits which were easy to ski. In no time at all I was whooshing out into Coire Ardair then down the long valley back to the car (with a wee bit of birch bush whacking).

The next day I teamed up with fellow mountain guide Twid. We headed into the northern corries for a short day as he had arrived late and we were going to the Ben the next day. We had a wild and windy day quickly climbing the Message (mostly with our eyes shut) before bailing back to Aviemore for cake eating (Twid does a lot of this).

The main event however was to be the Ben (Ben Nevis) and we had heard that the rare route ‘the Shield Direct’ was in condition. In typical Twid style he drove over first, I came over with Tamsin and Paul (who I hadn’t yet met but who was to climb with us) was going to meet us ‘somewhere’ on the Ben. Confused? I was.

We all sort of met at the CIC hut however and had a pleasant day climbing this rarely climbed route. I got to lead the ice pitch which pleased me (slightly out of balance, steep with screws that I placed in pre drilled holes) and Paul (Ramsden) got to lead the crux chimney pitch (traditional) and slightly quirky slab pitch at the end. It was good crack with 3 and felt pretty straightforward, though of course I was climbing with two Piolet d’Or legends (or so they kept telling me).

Lastly, I was determined to have a ski around the Cairngorms which again, I had never done. The cloud was annoyingly hanging around the Cairngorms whilst the rest of Scotland seemed drenched in sunshine but after a few coffees and a late start I couldn’t put it off any longer and set off into Coire Lochain and then on to the plateau, all the while in an eerie white out. I skied all the way over to the Goat Track via Cairn Lochain where it cleared a bit and in fact I could see Tamsin working on a gully not far away.

I decided to ski the Goat Track whilst waiting for Tamsin to finish and put a few tentative turns in. Again I was skiing wind blown soft deposits but sadly these ran out half way down and turned into brick hard frozen rime which chattered my teeth and certainly weren’t great skiing. I stopped about half way down, chopped a stance (pretty good idea having an axe handy on descents like this) and popped my crampons on and walked back up hill. We all had a nice get together at the plateau rim (Tamsin and her clients had finished the route) and I retraced my tracks over Lochain and descended the classic ‘Lurcher’s gully’ which turned into some great skiing (all the way back to the car for the 3rd time that week).