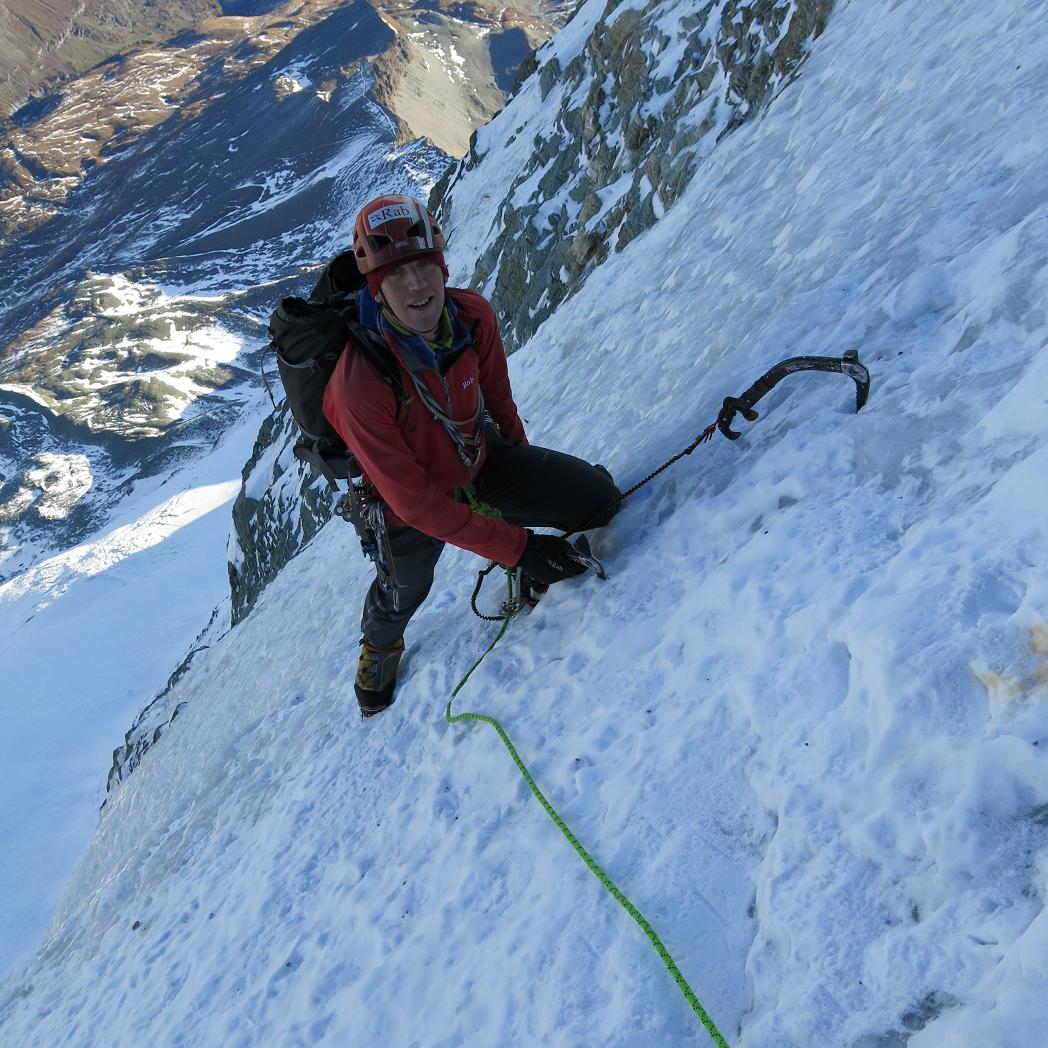 Mixed Climbing in the Alps and the Schmid Route, Matterhorn North face

The alps this season are the best I’ve known for icy, mixed conditions. The Grande Jorasses, Sans Nom and other north faces have been consistently in good condition and have had many, many repeats. I’ve managed to get out amongst it, both with work and personal climbing and mostly have got it right.

Kevin came out at the end of September and we packed in a fairly intense amount of climbing. We started the trip with the ever popular routes on the north face of the Cosmique Arete/Midi. These at times have been ridiculously busy and I just wouldn’t entertain getting into a bunfight if I can help it here. This season I have seen more than 6 teams waiting to abseil off the Passarelle bridge which is an accident waiting to happen – and of course with Chamonix’s flair for the bizarre it did; one alpinist put his shiny mono point straight through a high voltage cable causing a big bang and much consternation amongst the Midi staff. The abseil has now been moved to the other side of the bridge.

Kevin and I did a couple of routes here (accessed by down climbing and abseiling the Cosmique Arete). Firstly I did a variation between Vent du Dragon and the Profit Perroux calling it Souffle de Dragon. It won’t become an all-time classic but I am sure it will be repeated (probably by someone like me who just tends to follow my nose). Vent du Dragon has become really popular and does pack some good climbing in – about Scottish V6 and a good mix of ice and mixed.

With a couple of days up high we had a purgatorial walk up in the rain (always a day well spent if you are approaching a hut) to what has become one of my favourite huts in the Chamonix valley, the Albert Premiere refuge. This has been renovated and the new guardians are great, the rooms clean and the food nice. Our objective was the soaring line of the Escarra route on the Aiguille du Chardonnet (which I had previously bailed from with amoebic dysentery). We left in the middle of the night an hour after a couple of younger types (who the night before had talked about ‘simul climbing the entire route bar the crux’) but managed to pick a quicker line in across the glacier and passed them one pitch in. Sadly one of them tried really hard to stay with us and made just about every error he could belaying in spectacularly bad places (the prize being a third of the way up the crux pitch as his rope ran out). This all culminated in him falling off the crux which his ‘less experienced’ mate cruised. Anyway, the route is excellent and deserves its popularity. A good technical way to a summit before a quite tricky descent and huge walk down to Le Tour (the lifts were shut by now).

We then headed over to the Italian side of the range and I again tried a route I had bailed from this season (too warm last time) – the Rebuffat couloir on the Tour Ronde. This time the crux pitch was in perfect condition – squeaky storm packed plaquage (sort of Styrofoam snow) a great pitch which is never too steep but the protection is non existent. Another team came rocketing up behind us and I was initially a bit despondent after the silliness on the Escarra but this time the other team was a guide from Grindelwald who was about as pleasant and polite as you can get. As soon as I realised he was going to ‘slot in’ and cruise the route with us it became really mellow, with me even leaving anchors in place for him (and in fact they descended ahead of us from the summit).

After a brief sojourn back in the UK (where I’ve been sailing on the west coast of Scotland and taking a power boat course) I’ve arrived back in the alps to an extended spell of good weather. Frantically looking for a climbing partner I found the ever keen Stu Macdonald who I talked into trying the west face of the Aiguille du Plan. After a pleasant night at the refuge (probably the best food in the valley) we headed out into the night and into the rain. Unbelievable. Not sure where it came from but there was no denying we were getting wet, so was the snow and freezing it was not. A quite spectacular rock fall, which missed Stu by about 2 minutes (covering his tracks), made the decision very easy for us and back we went. More frantic phone calls and texts to Roeland (a Dutch guide and friend) and I discovered that he had to bail in similar conditions on the north face of the Matterhorn. Would he go straight back there with me? He would so it was all change and Roeland and I drove through to Zermatt.

And so it was that I found myself walking in to one of the six classic north faces of the Alps, the Schmid route on the Matterhorn. The hut is closed this year but in fact a small, dirty room has been left and you can sleep on the concrete floor inside. We brewed up and got into our bags before leaving again at around 04:00am. You can reach the foot of the face in about an hour and it was reasonably tracked. The route starts out on easy, steady snow and we climbed together for some way. Eventually the ice comes to the surface and the angle steepens so we lengthened the rope and climbed together popping the odd good, and the odd bad runner in for security. As dawn approached we scanned the way ahead and what struck me is the number of false alleys you could go down if you were unwary. The route does not naturally funnel you into the correct line (which is always rightwards) and I’ve heard of many people ‘topping out’ at the Solavy hut! But in fact we were lucky and the route does ingeniously link easy sections of climbing which seem to flow nicely together. Once in the ‘Ramp’ things steepen slightly but really you can move together over its entirety which we did until we met two alpinists who had been bivouacking on the face -the crux for me was avoiding the turds they had dumped down the route below which I thanked them for vocally. I didn’t stop to chat to them but Roeland gleaned from them that they had been on the route 26 hours (we had been going for 4) and that they had ‘climbed the Eiger’ before. By my estimation I think they are looking at a 4 or 5 day ascent in total which I think even the Schmidt brothers wouldn’t be impressed by. To be fair however they seemed to be safe and in control (and the weather forecast was excellent). And so Roeland and I cruised on up, pitching where it either steepened or we ran out of kit, eventually topping out on the Zmutt ridge and then the Italian summit at mid day to a great vista of the Valais giants, the Oberland massif, Mont Blanc and the Ecrins way to the south.

Of course it’s way too easy to put everything into gaining the summit (clients will often do this) and not have much left for the descent but both Roeland and I were confident that we knew the descent route well and would nip down it in around 4 hours (we would normally guide it in this time). We were both wrong in this and it became a fiddly, time consuming affair that eroded time. It was a weary pair who stopped off in the Solvay for a brew and much needed break before once again heading on down towards the Hornli hut and those welcome noodles, arriving some 15 hours after leaving. So a great route which both Roeland and I really enjoyed. Putting into context its time of first ascent is a little humbling and I am impressed by the route finding of the first ascensionists.

2 comments on “Mixed Climbing in the Alps and the Schmid Route, Matterhorn North face”